CONCEPT
The design gesture of this Penthouse is characterized by the respect of the outer casing of this 1970 Villa whose geometries are never affected by the design of interiors. Solemnity, simplicity and archaic elegance characterize the new interiors architecture in which time and space are manifested as a continuous flow.
INFO
The renovation building project of a three floor 1970 Villa provides a new concept of interior space cause the impossibility to intervene on the external walls building originally. The interior is designed for the creation of a space of calm and serene beauty devoting 600sqm for the creation of just two night rooms and a huge living area.
The original ground floor areas has been opened to create a large open space intervening even as far as possible on the external walls just to enlarge the panoramic view on the Adriatic Sea coast.
The existing circular staircase find a new identity thanks to a majestic white and suspended cylindrical volume where is located the guest suite and its bathroom which leads to a generous roof terrace.
The master bedroom of 150 sqm presents an armored access and is thought as a great Private Harem containing the round bed in the circular part , two bathrooms and two large dressing rooms. The peculiarity of this space is the total absense of dividing doors. It is also conceived as a large open space whose functions are separated by austere dividing walls and furniture. These dividers are always detached from the outer walls enhancing the “new” in the respect of the existing.
Prominent feature is the re-enactment of the great circular room whose center of gravity is marked by the presence of a large chandelier suspended over an island four faces sofà. Close to the opening kitchen is located in a scenic and panoramic corner the dining room.
The new geometries are strict and contrast intentionally to the sinuous original Villa’s wrapper. The floor is determined by a wood “noce” (walnut) alternating to White Maljat Stone bringing solemnity and archaic elegance. The presence of modernity is indisputable, but the ’70s feeling belonging to this large residence has not been deliberately abandoned; rather time and space are manifested as a continuous stream.
The architecture, interior design, lighting and furniture design are all primarily designed by Enrico Muscioni. 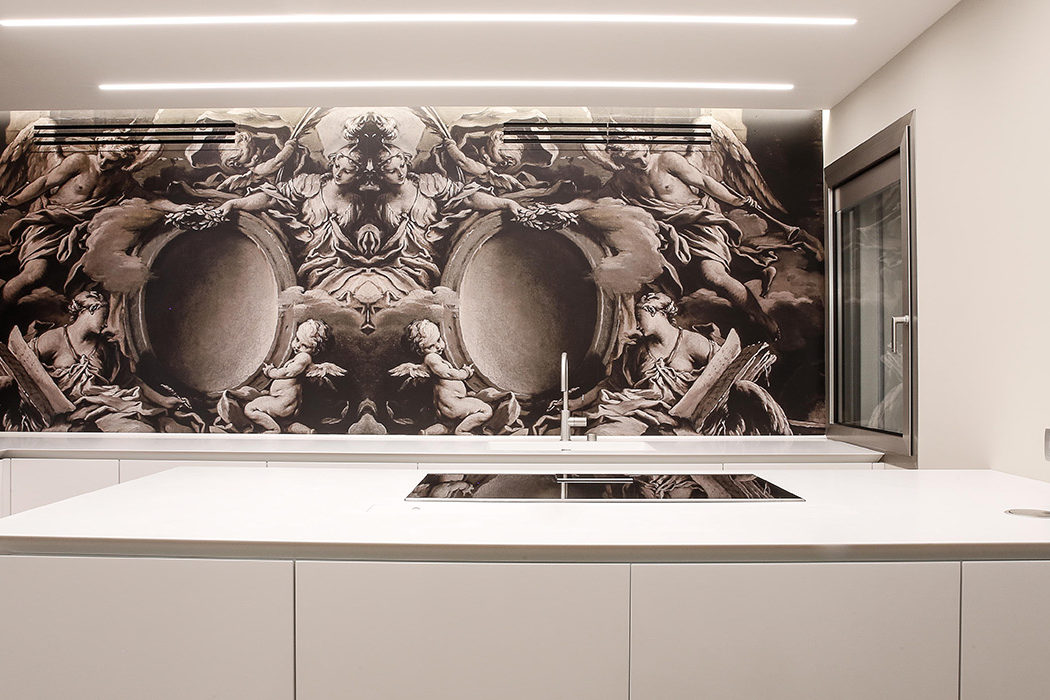 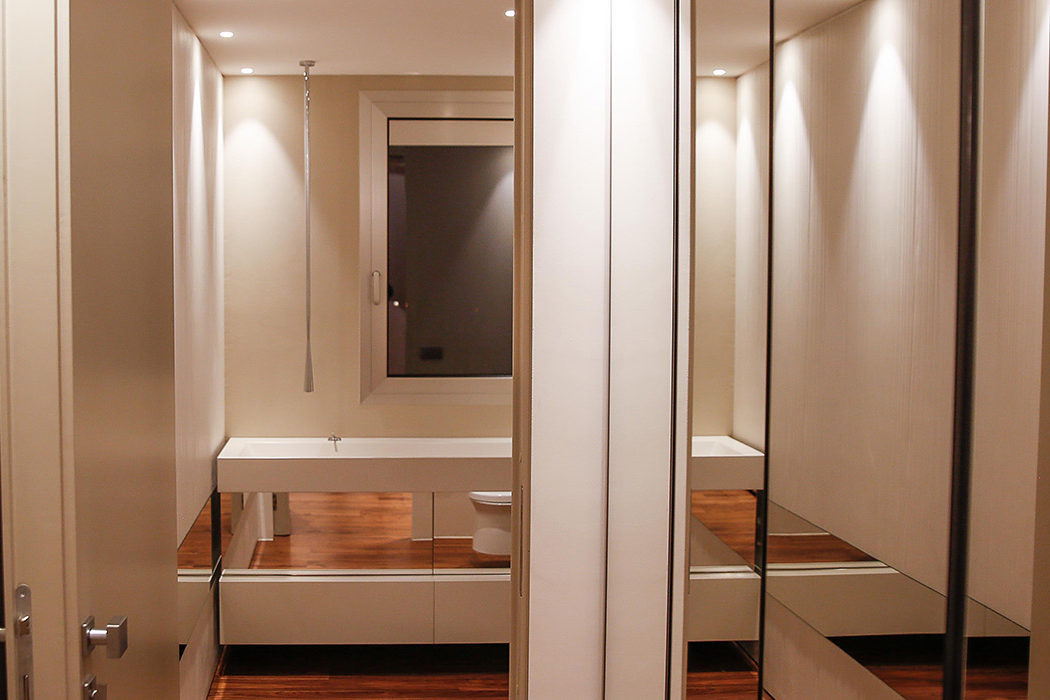 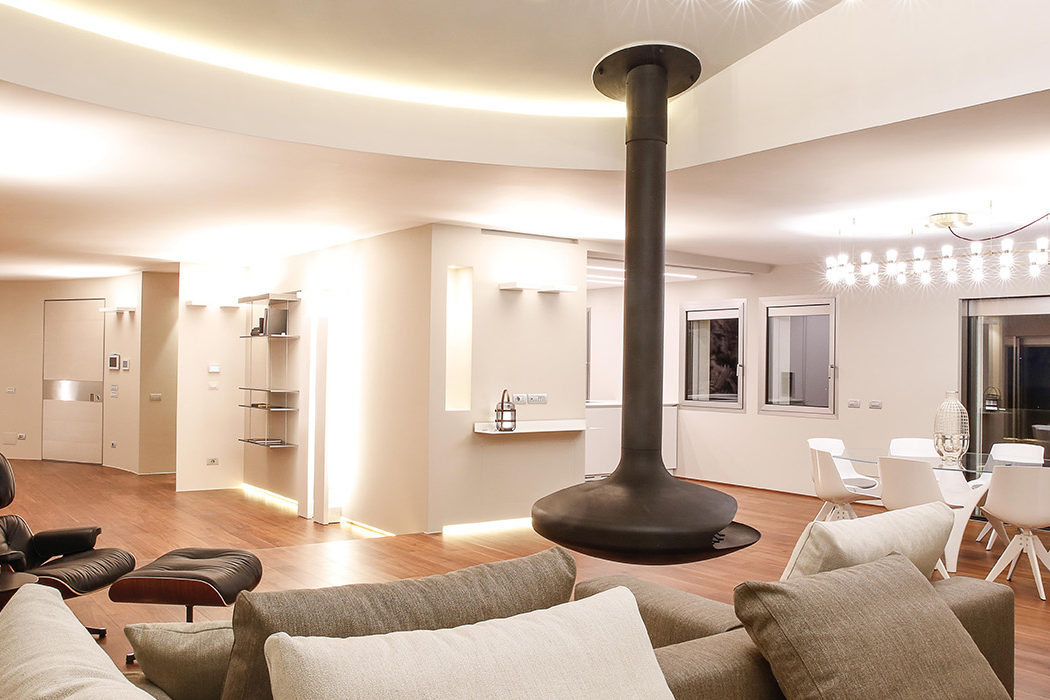 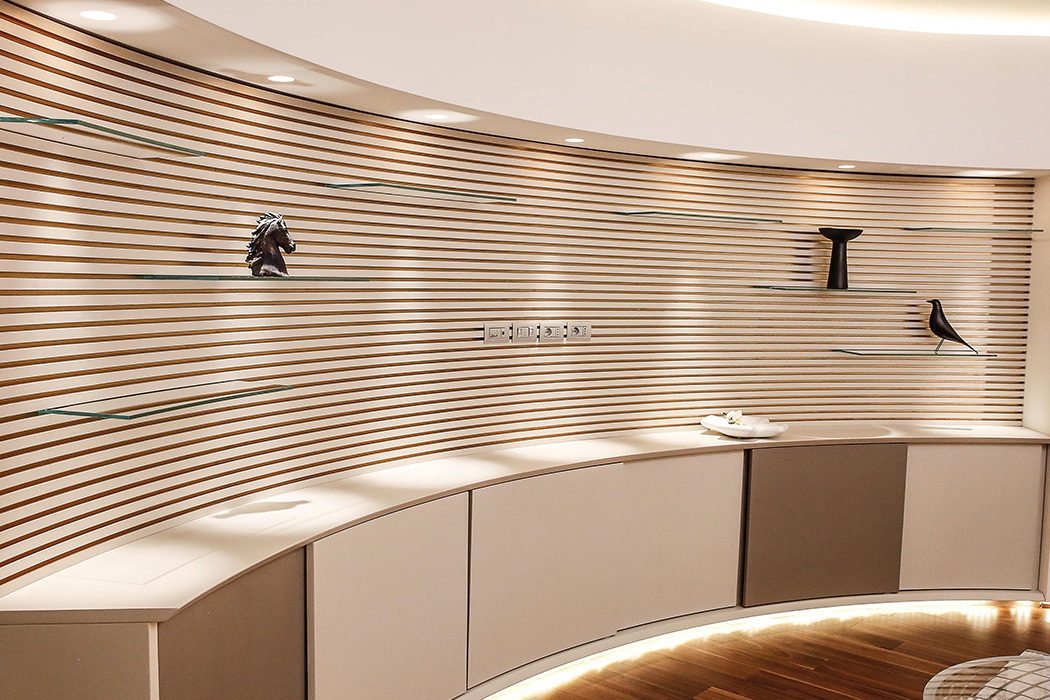 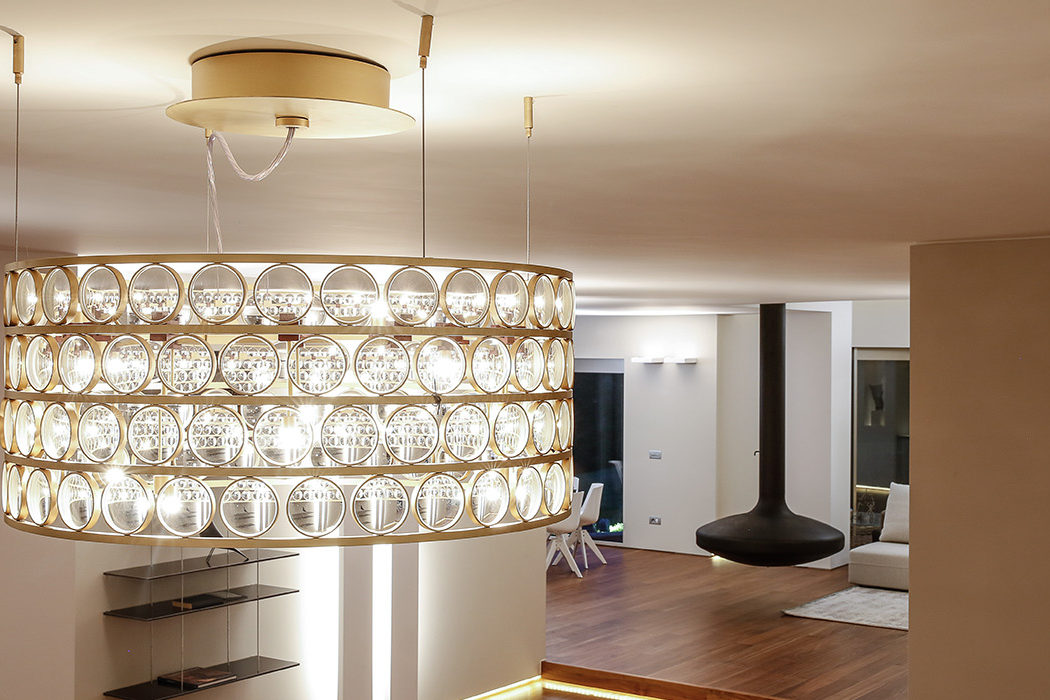 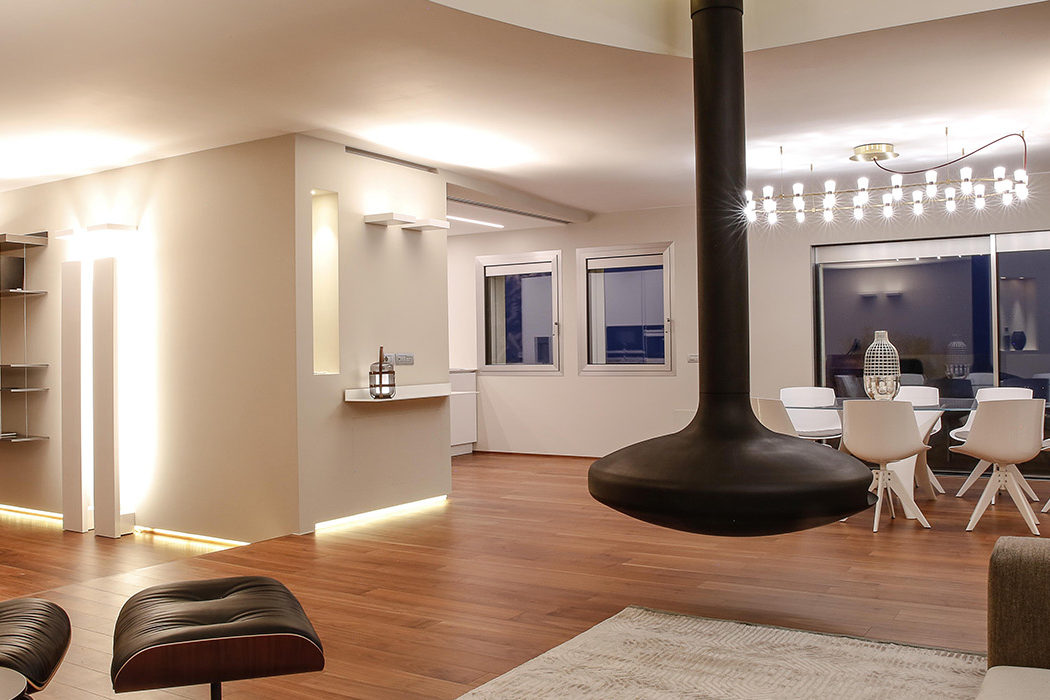 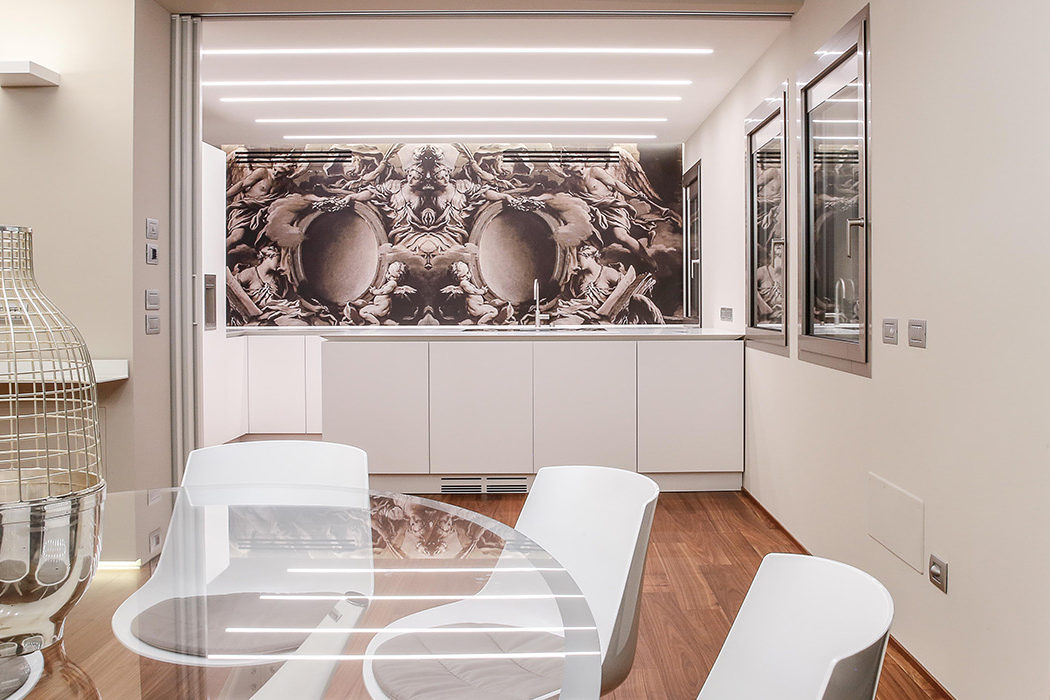 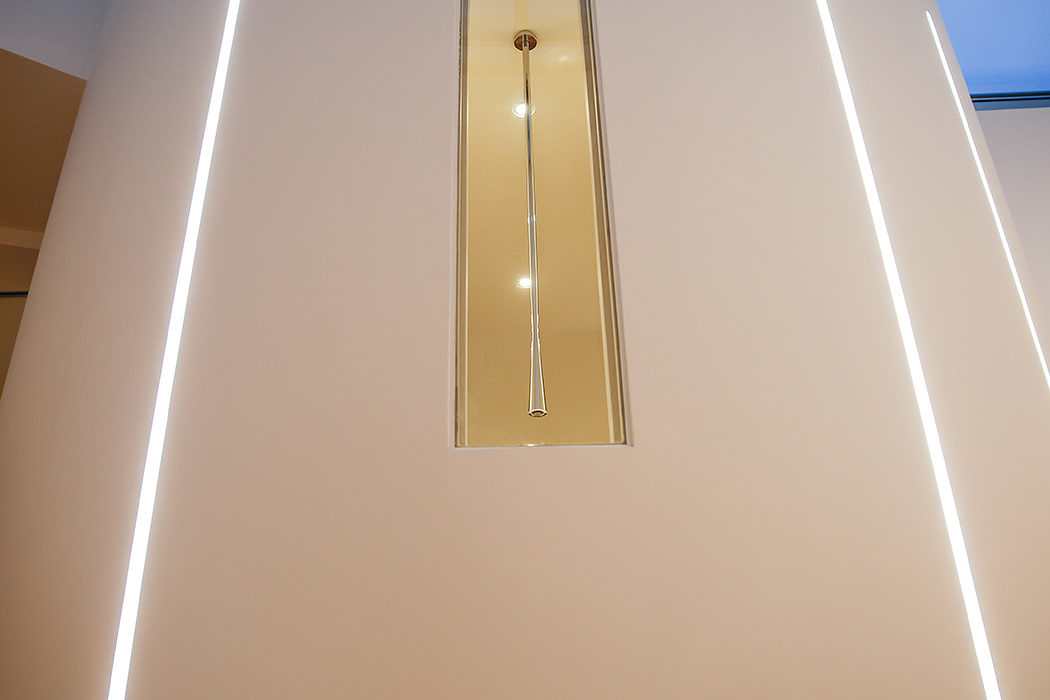 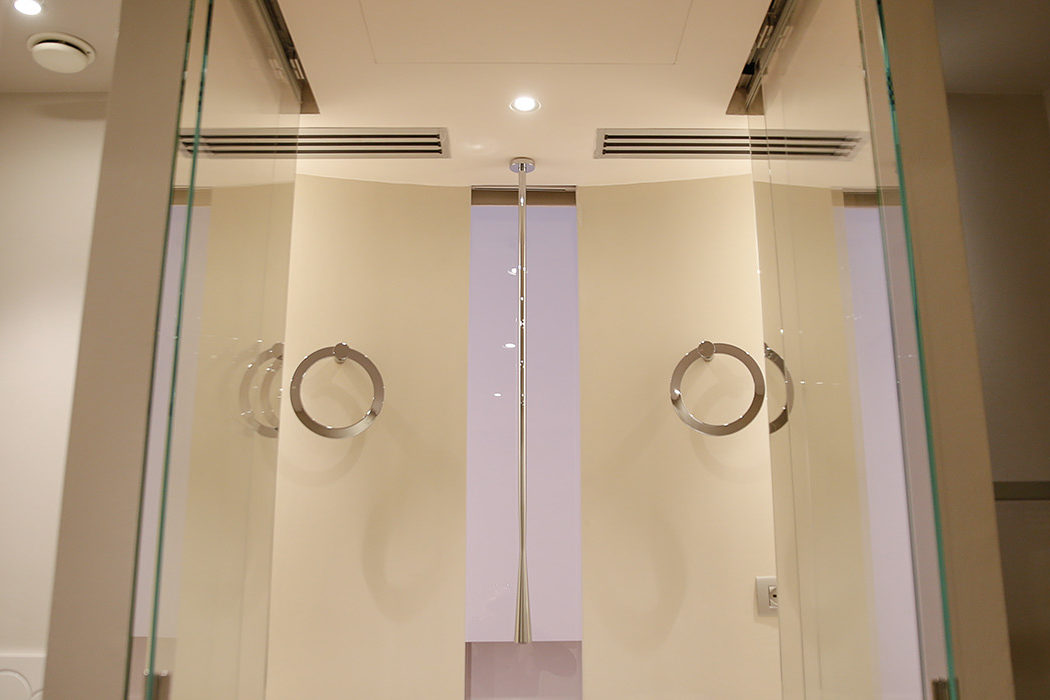 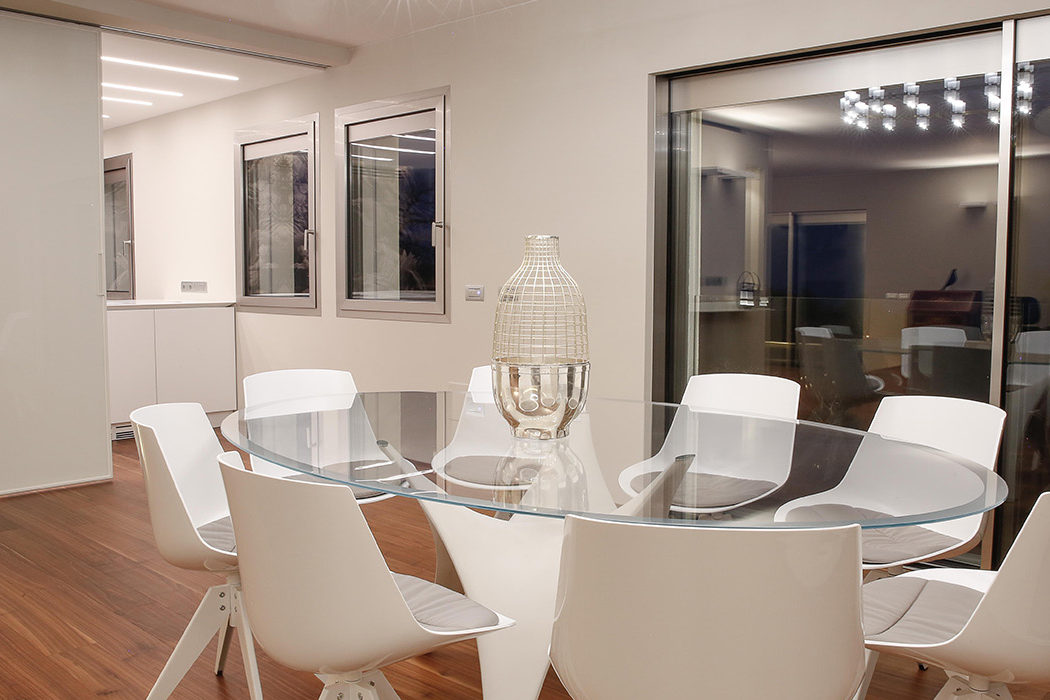 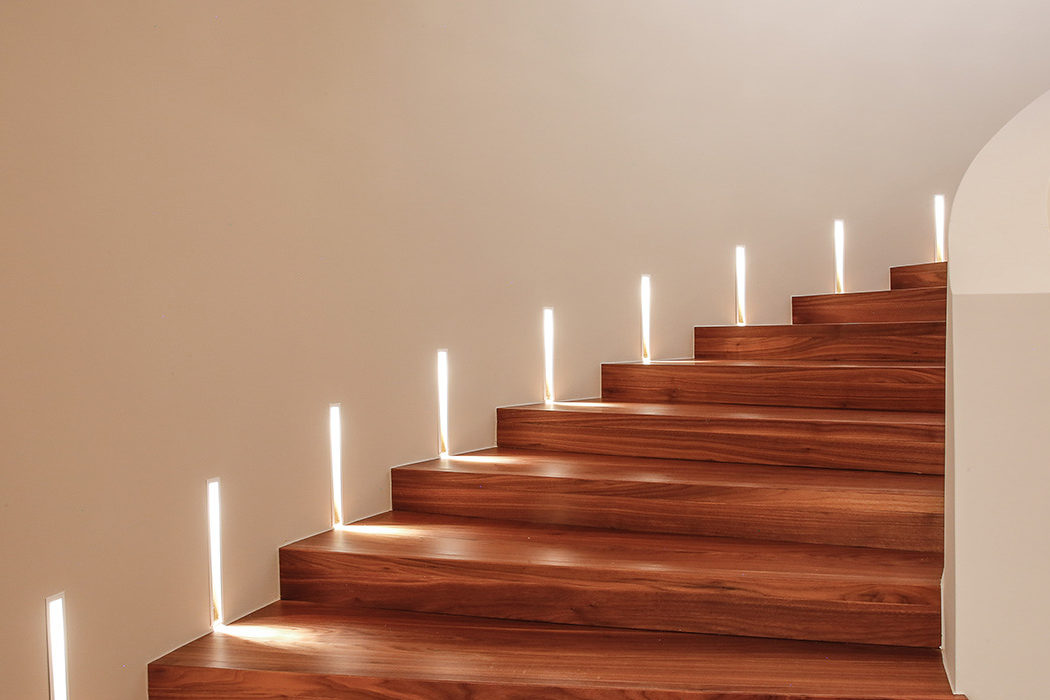